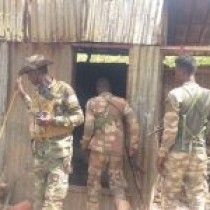 Somali National Army conducted security operations against Al-Shabaab in Mubarak village of Awdhigle district in lower Shabelle region on Thursday morning .SNA destroyed Shabab hideouts and recovered materials for improvised explosive devices The operation was aimed at destroying the Alshabaab bases.
During the operations, the Army managed to destroy a Alshabaab training centera.
Meanwhile, the Somali National Army has succeeded the arrest of several al-Shabab who were hiding in areas, including the head of finance in Alshabaab at Mubarak Abu Salman.
According to the Somali National Army Forces Radio, the officers who are leading the operation.
The operation is part of ongoing operations to hunt down al-Shabaab in the Lower Shabelle region.