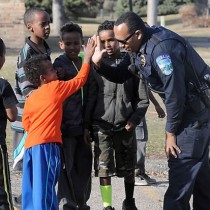 Officer Mohamed Mohamed enjoys stopping by impromptu soccer games while fulfilling his community policing duties in Mankato. He's hoping to start a more organized sports program this summer. Photo by Pat Christman
MANKATO, MN — During a typical afternoon on the impromptu soccer field in the middle of the Hilltop Lane apartment complex, 13-year-old Abdi Ali rules the field. He does his best to keep about a dozen younger kids around him focused on the game as they romp around the brown turf bordered by makeshift goals. They listen to him as he barks out names and tips about what to do with the ball.

Then officer Mohamed Mohamed pulls up in his Mankato Department of Public Safety squad car. Within a few seconds, the field is empty and Ali stands alone.

In some neighborhoods, you might expect youngsters to ignore a police officer when he pulls up or decide to move along to another location. The uniform is often a sign someone's in trouble — and it's not always pleasant answering questions from the officer wearing the badge and crisp blue shirt.


For the kids hanging around with Ali — many of them the children of Somali refugees — the stories about police officers could create more concern. They may have heard their parents talking about run-ins with law enforcement in their home country where a family member or friend faced brutal force or was taken away and never seen again.

The reaction to Mohamed doesn't fit either scenario.

Kids swarmed around the officer, bouncing up and down as they took turns throwing high-fives and riddling him with questions. Mohamed smiled, got the kids focused again, and within a couple of minutes they were back on the field playing soccer. Mohamed joined them, blocking shots and giving pointers.

Ali didn't mind losing the spotlight for awhile. The young coach likes officer Mohamed, too. They talk a lot and they're working together with other volunteers to start a neighborhood sports program this summer. The plan is to have kids from all over Mankato travel around to challenge other neighborhoods to a soccer match or other competition.

"He's actually pretty cool,” Ali said as he watched the mayhem. "He's doing good things for us and we like having a police officer we know.”

Mohamed has priorities and his police radio reminded him of that a short time after he arrived. He quickly told the kids about emails being sent to their parents about the summer sports program, passed around some quick goodbyes and got back into his squad to hustle off to a call.

He's as busy as any other officer in Mankato, spending much of his time responding to service calls for neighbor disputes, auto crashes, theft reports, drug complaints and more serious crimes involving weapons and violence. When there's time for community policing, he's been assigned to the Somali community. That includes the Hilltop Lane neighborhood, where there is a large population of Somali renters, and a few grocery stores around town.

Being a police officer is something Mohamed has always dreamed about. That dream started as a child in Somalia and continued after he became a refugee in Egypt. When he moved to the U.S. as a college freshman, settling with his family in Hopkins, he believed his chances of ever working in law enforcement were over. He didn't realize it was a job someone in this country could have without being born and raised here.

"In my head, I thought you could only be a police officer if you were born in that country,” he said. "That's how it is in Third World countries.”

Mohamed described a childhood that wasn't easy. Even after his family left Somalia to live in Egypt, he had to go to work at a young age because his family needed the income. He worked a variety of jobs, including a few in groceries where he stocked shelves and did other menial jobs.

"When I was little, I worked hard,” he said. "I got home from school and I went to work. Things were different there. You worked all day for $5 and there were no age limits to have a job.”

That work ethic helped him achieve a goal of receiving a college degree, even after he was told he would have to return to high school in Hopkins to meet the requirements for a higher education. Mohamed originally planned to go into business but decided to pursue his childhood dream again after meeting a Somali police officer in the Twin Cities.

"He told me all you need is citizenship, a college degree and you have to love the job,” Mohamed said.

There were opportunities in the Twin Cities area after he graduated, but Mohamed decided to accept a job in Mankato instead. He's relatively new to the force and the first Somali-born officer to serve with the Department of Public Safety.

The department has a philosophy of community policing, something Mohamed has embraced while starting his new career. He quickly became well known within Mankato's Somali community and has been building bridges in places that had been difficult for officers in the past.

The department has had a strong relationship with the Somali community for awhile, but Mohamed has added a new dimension, said Todd Miller, public safety director.

Mohamed is Somali, he speaks that language and Arabic, a language shared by other African refugees living in Mankato, and he knows what it's like to be a refugee living in the U.S.

Much of what he is doing, including his plan for a summer sports program, fits perfectly within the community policing philosophy, Miller said. Not just with Somalis, but the community as a whole.

"We try to hire leaders,” Miller said. "Every one of our officers has an assignment: a neighborhood, a campus, working with seniors. I tell them to make decisions like they are the chief of police of that neighborhood.”

Officers are allowed to do anything they want to do in their assigned area as long as it meets the department's mission of "Leading the way and making a difference.”

Mohamed said he wanted to be in a job where there was a large Somali community and he could be the first Somali officer. The departments in Minneapolis and St. Paul already had several, so he didn't think he could have the same impact as he could have in Mankato.

"I thought, 'What about smaller towns?” he said. "There are other Somali communities that need police officers.”

His decision has paid off for the Department of Public Safety, said Deputy Director Amy Vokal. Mohamed is a community-minded person, so his skills can be used throughout the city.

"He has a different skill set than we were used to and all of a sudden we can speak to more people than we used to,” Vokal said. "He's a talker and he's very, very easy to talk to, and he connects with people. He's very good with people, people across the board.

"He's obviously much better equipped to understand what it's like to be a refugee in this country than most of us are. When he talks to somebody, he can get that personal background.”

One of the first people Mohamed met in Mankato was Ahmed Barkhadle, owner of the Barkhadle International Grocery across the street from downtown's Public Safety Center. He stops by the store regularly to talk to Barkhadle and his customers, which is one of many tools he uses to develop relationships that help him on the job.

When I came here for an interview for the job, I said, 'That looks like a Somali name,'” Mohamed said. "So he's the first person I got to know in Mankato.

"If you want to get to know the community or meet people in the community, a good place to come is the grocery store.”

Barkhadle is used to officers stopping in now and then to talk or pick up a snack during their shifts, as they do at many local businesses. But having Mohamed stop by for visits is a more comfortable experience because fewer barriers exist.

"I was so happy to see this guy,” Barkhadle said during a recent visit. "When the officer can speak your language, it's very helpful.”

The same visit also brought a little razzing from a younger customer in the store. He didn't know Mohamed but recognized him from seeing him at a business in St. Peter. Translating later, Mohamed said the man said he saw him eating.

"I told him I was hungry,” Mohamed said as he laughed and rubbed his stomach.

He was moving barriers — something that's easier to do in a grocery setting than in the middle of a police call where someone is being cited or facing arrest. The same skills come into play during those situations, though, Mohamed said.

"A lot of Somalis, when they get into trouble, they have some sort of language barrier,” he said. "They don't understand their rights and the laws, so it creates more barriers.”

His grocery loyalties in Mankato change when he's looking for a prepared meal. A good time to visit the International Halel Market in the Village East Center strip mall near Hilltop Lane is during breakfast, lunch or dinner, he said.

"I'm single and I don't cook, so I stop here often,” he said during a recent visit to the restaurant and store.

Mohamed Ahmed, the store's latest owner, is a 2004 East High School graduate who received an associate degree in sales and marketing from South Central College before earning a bachelor's degree in accounting from Minnesota State University. He has only developed a casual relationship with Mohamed so far, but he said he likes how the officer talks to store customers and works with kids living in the Hilltop Lane apartment complex.

Ahmed used to be one of those kids when his family moved into the complex in 2001.

"I think he's not helping only Somalis, but Africans — the immigrants,” Ahmed said. "He respects the language. He talks to young people. He builds trust. He's a gentleman.

"We want a feeling of trust between the police and the community.”

After Mohamed left Ahmed's store, his next stop was the nearby soccer field where Ali and the other kids were playing. As he left for his police call, he said his first year on duty in Mankato has confirmed he made the right decision. The kids he enjoys working with show that.

"It feels good to let them know if you have a dream, you can achieve it,” he said.