The Former President of Somali Ali Mahdi Mohamed passed away 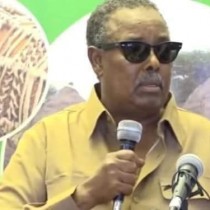 Former Somali president, Ali Mahdi Mohamed has on Wednesday evening passed away for unidentified illness at a hospital In Nairobi, Kenya.

Prime Minister of the Federal Republic of Somalia, Mohamed Hussein Roble expressed sorrow over the death of the deceased president,Ali Mahdi Mohamed.

”I am conveying deep condolence to the family, friends and Somali people on the death of the president, Ali Mahdi Mohamed who died tonight ", Mr. Roble said.

The Prime Minister added that the deceased president was hero, businessman, politician and peace seeker.

The deceased statesman was elected as president In Djabuti after the oust of former president, Mohamed Siyad Bare in 1991

Somali people expressed sorrow over the sudden death of the president by sharing their feelings on social media such as Facebook and Twitter after learning the news.

He was born in 1939 and became member of the 1st Parliament of Somali Republic in 1960s.

May his soul rest in Jannah