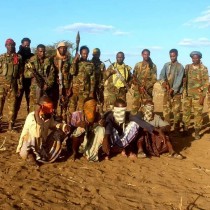 Almost four Al shababab members were arrested, who were causing a lot of problems to the residents of Awdinle and its villages.

The army received the information and captured it. The Somali National Army (SNA) has been working day and night to protect their people from the enemy Al shababab.