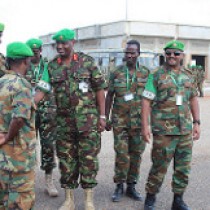 AMISOM Force Commander Lt. Gen. Jonathan Rono has said that the war against terrorism will be won faster and more effectively if better embraced and supported by local communities which the troops serve.

He was speaking during a visit to AMISOM Ethiopian National Defence Forces (ENDF) troops serving in Sector 3, headquartered at Baidoa. The Sector covers the Bay, Bakool and Gedo regions.

He was received on arrival in Baidoa by the Sector Commander Col. Yemane Gabre Mikael along with other AMISOM officials. In his briefing to the visiting delegation, the Sector Commander said his troops had successfully executed tasks as set by Force Headquarters, inflicting irreparable losses on Al Shabaab militants.

"Through the direction of Force Headquarters, we were successful in liberating Baadheere and Diinsoor, which were key towns for Al Shabaab. That was a significant achievement, saving the population from the torture they had endured under Al Shabaab. The people of the two towns now leave in peace and have now joined us in fighting Al Shabaab, the terrorists,” Col Yemane said.

The AMISOM ENDF Forces have in the recent past liberated many towns and villages. They include Bush Medina, Canan, Ramade, Eidale, Elalen, Dulle, Morgaten, Geresewoini, and Burduhelle, among others. Over seven hundred terrorists have been killed; weapons, ammunition, equipment and cars have also been captured.

The Sector Commander said Sector 3 military successes could not have been achieved without partnership with the Regional Administration and Federal Security Bodies.

"Through our Joint Security Committee (JSC) which brings together AMISOM, local administration, SNA and elders, we are able to work together to achieve our common goals. We meet once a month. Because of this, the local population has sent us over two thousand youths for military training, boosting our numerical strength. The SNA have also made great strides in this region. Independently, they have cleared enemy obstacles and ambushes, gathered information and sorted out Al Shabaab from the community. They have further liberated Gofgudud, Bure and Tulu Berwaqo,” Col Yemane summed up their interventions.

The Force Commander who had time to meet with ENDF soldiers thanked them for the liberation of the many towns and villages in their area of responsibility, key among them being Baadheere and Diinsoor.

"Your liberation of Baadheere and Diinsoor sent a powerful message to the world and especially to Al Shabaab that AMISOM would not rest until the whole of Somalia is safe. Through your effort, the people of this region are now able to go about their daily activities without the fear of being terrorized. It is for this reason that i also want to thank Troop Contributing Countries (TCC) for their support to AMISOM, providing the troops that are eroding the ability of terrorists to bring misery to the people of Somalia,” he said.

Their efforts at diffusing Improvised Explosive Devises (IED) were also highlighted by the Force Commander.

"I want to make special mention of your counter IED team, which has done an exemplary job of saving lives and equipment thereby ensuring our efficiency and effectiveness. Because this has been the weapon of choice in Al Shabaab strategy lately, your ability to deal with it means Al Shabaab will be destroyed in a short time,” he added.

The Force Commander further paid glowing tribute to Sector leadership for forging an effective partnership with the local community, enabling attainment of security and community goals.

"I wish to thank the Sector Commander and his officers for being good ambassadors for AMISOM in this region. Through your efforts and those of your officers, the local administration and community have come to recognize AMISOM ENDF troops as partners in ensuring that there is peace, stability and development in this region. It is because of this that Al Shabaab killers cannot find safe haven in this Sector. The local population has denied them access,” he told the ENDF troops.

Later, the Force Commander held discussions with senior officials from the Interim South West Administration including the Minister for Security as well as the Minister for Disarmament, Demobilization and Reintegration (DDR). The discussions were centered on boosting the good relations between local leadership and AMISOM.