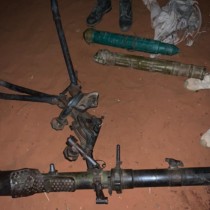 At least fifteen al-Shabaab have been killed and several others were arrested by Somali National Army near Dhusamareeb town.

Somali National Army special force Gor gor carried out operations against Al shabaab in the outside of Dhusamareeb town capital of Galmudug state As officials SNA confirmed to SNARADIO that the operation was conducted successfully and the troops have killed sixteen Al shabaab members as several others were arrested in their Commander and seized vehicles, mortar rounds and weapons were recovered in the midnight operation.