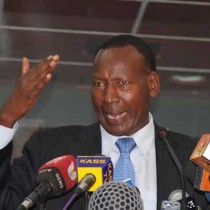 Interior Cabinet Secretary Joseph Nkaissery
Kenya will this week start constructing a wall to separate it from Somalia as part of efforts to contain terror attacks. Interior Cabinet Secretary Joseph Nkaissery said the construction will start this week. "Mandera and Bulahawa are almost merged and you cannot tell which is which. Now we want to put a wall at border point one and close the border. That will reduce the porous border entries into our country. We will be starting the construction of the border next week,” said Nkaissery.

Mandera Senator Billow Kerrow welcomed the move but argued it is not a long-term solution to the problem in the area. "He is admitting there are terrorists operating there and not bandits as he has been claiming. We hope it will help in containing the problem,” said Kerrow. He added it would be difficult and expensive to construct and man the more than 200 kilometer long wall at the border.


The Senator challenged Nkaissery to come up with long lasting solutions that can help in containing continued attacks.

Other officials said the government had transported construction materials to the targeted areas and construction will start anytime. The region has suffered several attacks attributed to the Somalia based militia Al Shabaab. Mandera and Bulahawa are about two kilometers apart and officials believe it is the only area that has remained under attack whereas others are relatively calm and secure. Governor Ali Roba said up to 90 people had died in the area in the past seven months out of terror related attacks. Roba said County Commissioner Alex ole Nkoyo is feeding Nkaissery with wrong information about terror attacks and demanded for his sacking

He also told Nkaisery to spend time to study the terror crises in Mandera before ridiculing himself in public.

"I sincerely hope you will perform. If those in charge have resorted to denial then what do we tell Kenyans about the terror threats that are increasing by the day in Mandera.” He added that every week in Mandera people are losing their lives to terror attacks but Nkaisery is terming the incidences as banditry attacks. "If the person who is put in charge of internal security is in a state of denial of existence of increased terror threats then we are doomed,” he said. Kerow spoke in Nairobi while Roba spoke from Mandera. On his part, Kerrow wondered why police officers in Mandera covering more than 30,000 square kilometers are given small amounts of money as compared to other regions, which are less than 5,000 square kilometers.

He said insecurity is hampering development in the area and other affected regions and urged for seriousness from the national government in tackling it.

Roba had said his life is in danger following separate attacks that left seven people dead and added there is urgent need for the removal of area County Commissioner whom he accuses of being clueless about security management. Roba said this was the sixth attempt on his life and he questioned the national government’s seriousness to safeguard his life but Nkaissery said the attacks in the area are isolated. He said there is no indication the attacks are targeting the governor alone. He said up to 11 people have been killed in the past week alone in separate attacks in the region. The latest incident happened last week when gunmen shot and wounded three people before killing four others after they locked them in a shop and burnt it