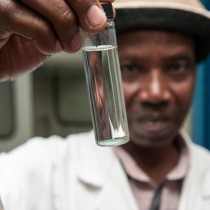 In a first for Africa, a public-private water fund was launched in Kenya on Friday, bringing together businesses, utilities, conservation groups, government and farmers to fund upstream water conservation through activities such as watershed protection and reforestation. The Upper Tana-Nairobi Water Fund was launched by the Nature Conservancy, a US-based NGO, which has used the same model in 32 initiatives in Latin America. Its partners in Kenya include East African Breweries Ltd, Coca-Cola, Nairobi City Water and Sewerage Company (NCWSC), and electricity provider KenGen.

The 1,000-km Tana river, which flows from the Aberdare mountains north of Nairobi to the Indian Ocean, is Kenya’s longest, and supplies 95% of the water used by the capital’s estimated 3.4 million residents.


Since the 1970s, forests and wetlands in the Tana river basin have been converted to agricultural land. Where water would once have been stored in the soil and filtered, it is now running straight into the rivers, increasing sedimentary deposits. These deposits clog up reservoirs and push up the cost of water treatment.

An estimated 60% of Nairobi’s residents do not have a secure water supply, and demand has grown by 350% since 2004, according to NCWSC.

The new fund will be managed by a trust, which seeks to raise $15m (£10m) to invest in soil and water conservation activities in the Upper Tana watershed. Landowners and NGOs will work upstream to protect the watershed and "harness nature’s ability to capture, filter, store and deliver clean and reliable water”, according to the Upper-Tana Nairobi Water Fund business case report.

The report said a $10m investment will return $21.5m in economic benefits over 30 years, including gains for farmers, Nairobi’s water and sewerage company, and KenGen.

"It’s good economic science and the best we could do,” said Colin Apse, senior freshwater conservation adviser at the Nature Conservancy. He added that the Zambian capital Lusaka was preparing to launch a similar scheme, with other cities in sub-Saharan Africa also expected to roll out water funds in the future.

The project’s partners have already raised nearly $2m, which has been used to launch the initiative, carry out a business case study, and fund conservation activities in an initial two-year pilot phase.

Water security is a priority issue in the sustainable development goals (SDGs), which will be finalised this September. About 748 million people do not have access to an improved source of safe drinking water, according to the UN, and 40% of these live in sub-Saharan Africa.

However, there has been some criticism of its funds in Latin America. Jaime Ignacio Veléz Upegui, a professor at Medellín’s National University of Colombia, where the Nature Conservancy established one of its first water funds, said such schemes were too speculative, arguing that the environment should not become a business chain.

"Despite investing in water, they do not directly result in water,” he told the US environmental publication Ensia.

He said such schemes could result in the public’s environmental sensibilities being harnessed to build a system for business, leaving people feeling cheated and less inclined to participate in future.

Backers of the new fund believe it will save money for businesses and consumers.

Water in the Upper Tana basin is becoming increasingly turbid, the land is being eroded and productivity is declining. Already, $500,000 has been spent by the fund on pilot activities, such as terracing to redirect run-off water, installing drip irrigation systems, and planting to stabilise the soil.

Water from the Tana also generates 50% of Kenya’s hydropower, which accounts for 43% of all power produced in-country, according to KenGen, which is on the steering committee of the new fund.

KenGen expects the fund’s activities to result in savings of $6m in avoided interruption and increased water yield.

"The benefit is huge to us,” said Joshua Were, an environment manager at KenGen. "It comes with increased rate yield to avoid interruptions in our operations, which ultimately means better services … and lower bills for our customers.”