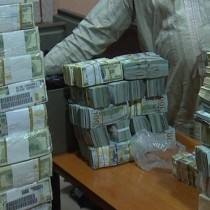 Nigeria's anti-corruption watchdog, the Economic and Financial Crimes Commission (EFCC) has found what it described as a 'staggering' sum of money from a former head of the country's oil company.

The monies they added was found in a house located in the northern Kaduna State and was kept in a fire proof safe.

‘‘On arrival at the facility, the caretaker of the house, one Bitrus Yakubu, a younger brother to Andrew Yakubu, disclosed that both the house and the safe where the money was found belong to his brother, Andrew Yakubu.

‘‘When the safe was opened it was discovered that it contained the sum of $9,772,800 (Nine Million, Seven Hundred and Seventy-Two Thousand, Eight Hundred United States Dollars) and another sum of £74,000 (Seventy Four Thousand Pound Sterling),’‘ the EFCC said in a statement on its Facebook page.

The body added that Dr Yakubu who was Group Managing Director of the Nigeria National Petroleum Corporation (NNPC) confirmed to them that the money belonged to him adding that ‘‘it was a gift from unnamed persons.’‘ He was head of the NNPC for two years from 2012.