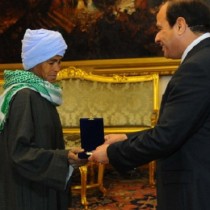 Egyptian President Abdel Fatah al-Sisi hands Sisa Abu Daooh the motherhood award. (Courtesy: Guardian newspaper)
An Egyptian mother who dressed herself as a man to provide for her family was awarded by President Abdel Fattah el-Sisi on Sunday for working more than 40 years. Sisa Gaber Abu Douh, 65, became known in her home town of Luxor as the city’s most supportive mother and has recently received the "breadwinner” award from the Social Solidarity Ministry on Mother's Day celebrated in the Arab world last week.

Her story made worldwide headlines this week. Sisa was left at 21 pregnant with a girl and without a source of income when her husband passed away. But the devoted mother chose to give up her femininity to provide for her only daughter, Huda. She decided to work and disguised herself as man, as she comes from a less privileged part of the Egyptian society, where working women are frowned upon.

She wore loose-fitting traditional male robes and a turban. She worked as a shoe-shiner, laborer and farmer.

"I preferred working in hard labor like lifting bricks and cement bags and cleaning shoes to begging in the streets in order to earn a living for myself and for my daughter and her children,” she said. "So as to protect myself from men and the harshness of their looks and being targeted by them due to traditions, I decided to be a man … and dressed in their clothes and worked alongside them in other villages where no one knows me.”

Sisa expressed her happiness over being invited to meet the Egyptian president and told Al Arabiya News in an interview that she will ask him to provide a home for her only daughter.